This is a partial listing of some of the events we have had in the past.

Where we invite congregants to bring in their best latkes in a cut-throat competition for the tastiest morsels.  Past winners have been the Jew-maican Patties, The Starsky & Latke, Ingie’s Latkes, and Bulgarian Sweet Latkes, and many more. 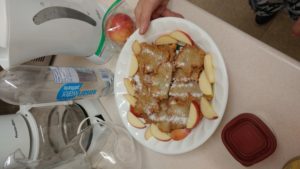 Every Purim party needs a Purim Schpiel, and we gottem.  Good, corny, groany, but mostly just plain funny.  Anyone with a kosher ham bone is invited to act and everyone ends up rolling on the floor for a good time.  And don’t forget the Karaoke. Eveyone loves the Karaoke.

The Worlds Most Dangerous Driedel:

A few years ago we tired for the guiness world book of records title of worlds largest driedel.  We didn’t quite get it on a technicality, but our 32 foot, 4 inch Driedel was a smash.  Especially when it landed.  We played a game of driedel with four people spinning it.  Much fun and danger was had. (When a 32′ driedel falls, you HAVE to pay attention). Video

We had 80 people come out to celebrate our Rabbi’s 80th Birthday party.  We had music, speeches, comedians, and of course lots of food. We laughed, we cried, it WILL be a part of us forever.

The Walk for Israel team every year:

Havdallah Services at Members homes each July and August:

Trips to other cities and Synagogues: